An array of alternative technologies is helping to increase the sustainability of the maritime transport sector. Whether onboard or onshore, technology is a driving force in helping to mitigate the various pressures that shipping puts on the environment.

This page contains an overview of some of the main technological developments that are either being used or are being investigated for further use in the maritime industry.

The potential environmental benefit of an all-electric vessel is unquestionable; it can remove carbon dioxide and other air pollutant emissions as well as reduce underwater noise.

The number of battery-powered vessels (either partly or wholly) has grown considerably over the past two decades, both inside and outside the EU: 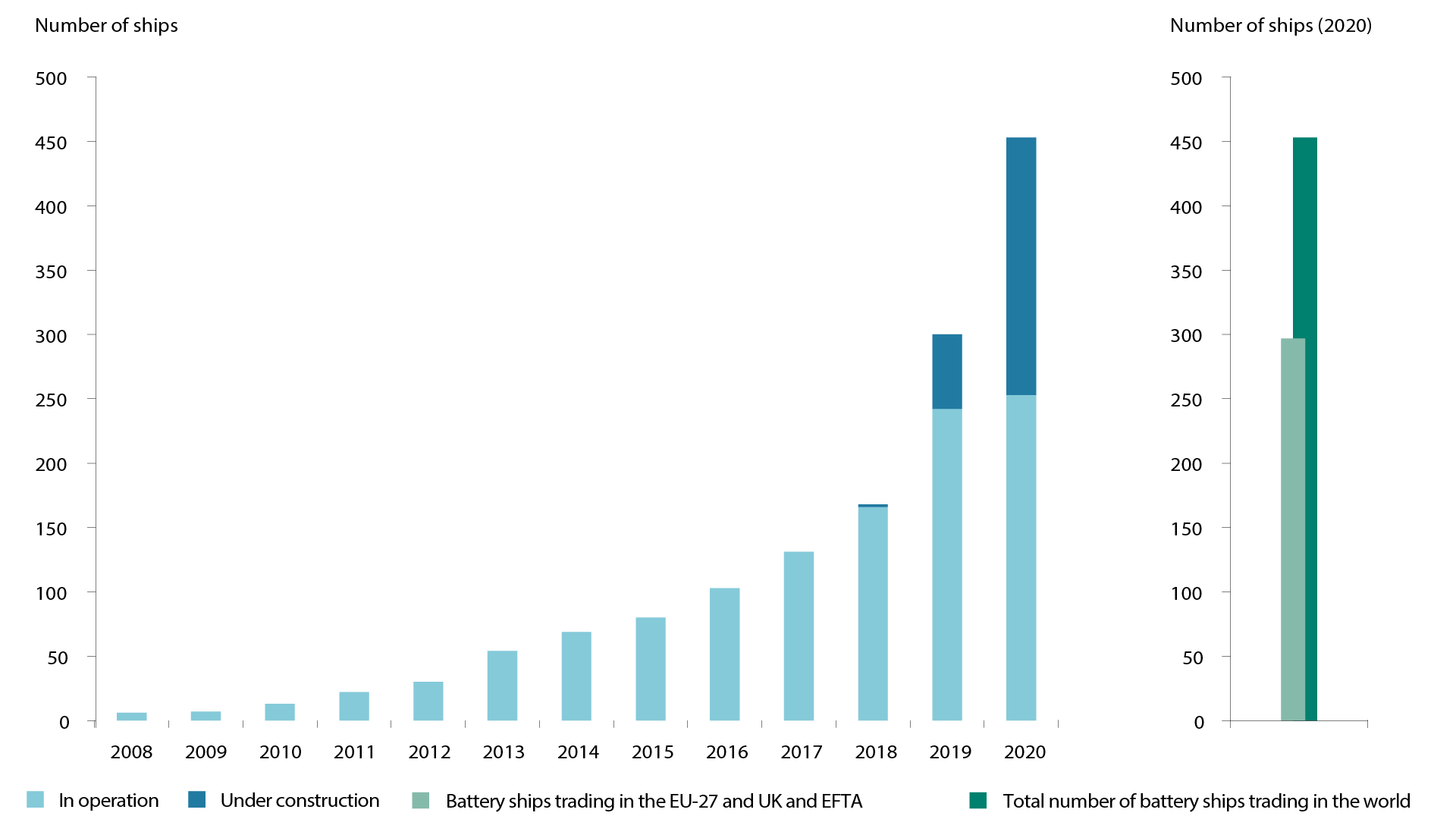 Of all the ships that are actively trading and have batteries, half of them are hybrid ships and roughly 18% are all-electric ships. In terms of ship types, passenger ships and ferries represent the segment currently making the most use of batteries.

Batteries can be charged using either onboard electrical power generation or an onshore power supply (OPS), using a variety of charging methods including renewable energy sources.

One of the best-established alternative technologies in sustainable shipping is the exhaust gas cleaning system (EGCSs) sector, commonly referred to as scrubbers.

Scrubbers are designed to remove sulphur oxide (SOx) matter from ships’ exhaust gases. SOx removal efficiency can reach 95% or higher, depending on the specific system and installation, with a portion of particulate matter (PM) also removed.

Scrubbers can be classified as wet or dry systems. Wet systems use sea or freshwater or both for the removal of air pollutants, and dry systems are normally used in shoreside installations.

EU rules on sulphur content in fuels allow the use of scrubbers as an alternative to using low-sulphur marine fuels, provided that they continuously achieve reductions of sulphur dioxide emissions that are at least equivalent to the reductions that would be achieved by using marine fuels. As of 15 June 2020, the total number of ships worldwide in service with scrubbers stood at 3 440.

The EEDI threshold varies depending on ship type and size, although those covered are responsible for approximately 85% of the CO2 emissions from international shipping.

The EEDI is being implemented in phases:

In addition, the IMO is working on introducing additional requirements affecting all ships, such as a technical requirement to reduce carbon intensity, based on a new energy efficiency existing ship index (EEXI), together with a new operational carbon intensity indicator (CII). An EEXI would be required to be calculated for every ship, which would then indicate its energy efficiency compared with a baseline. In the case of ships above 5 000 GT (gross tonnage), the CII would determine the annual reduction factor needed to ensure continuous improvement in the ship’s operational carbon intensity within a specific rating level.

In 2018, the technical energy efficiency of ships calling in EU/European Economic Area ports was generally comparable to that of the world fleet (except for small container ships). Most of the monitored ships built after 2015 already comply with energy efficiency standards applicable over the period 2020-2025 (EEDI phase 2). Younger ships from the monitored fleet tend to have lower installed power.

EMSA has produced a number of important studies, including on the use of fuel cells in shipping, and on electrical energy storage on ships, to inform debate and policy-making around the issue of new technologies and sustainability in the maritime sector.