The FIRESAFE studies commissioned by EMSA have been the basis of the IMO work on reviewing and updating the fire safety standards of ro-ro passenger ships. A first result of this work is the adoption by the IMO of the Interim Guidelines (MSC.1/Circ.1615) related to this topic.

In September 2015, EMSA held a workshop on fires on ro-ro decks for maritime administrations and accident investigation bodies, together with relevant speakers from industry. Following this workshop, a Group of Experts (GoE) was created to discuss and further analyse this issue. As per its mandate, the GoE achieved significant resultsand lead to the commissioning of the two FIRESAFE studies and in the opening of a relevant agenda item at IMO.

The main objective of the studies was to improve the fire safety of ro-ro passenger ships through the implementation of cost-effective safety measures that reduce the risk of ro-ro space fires. Both studies were conducted by Bureau Veritas, RISE Research Institutes of Sweden and Stena Line. The two studies investigated the various stages involved in fire-related accidents, namely ignition, extinguishment, detection, decision, containment, and evacuation.

An interactive infographic reflecting the results of the cost-effectiveness assessment which was performed in the FIRESAFE studies is available below: 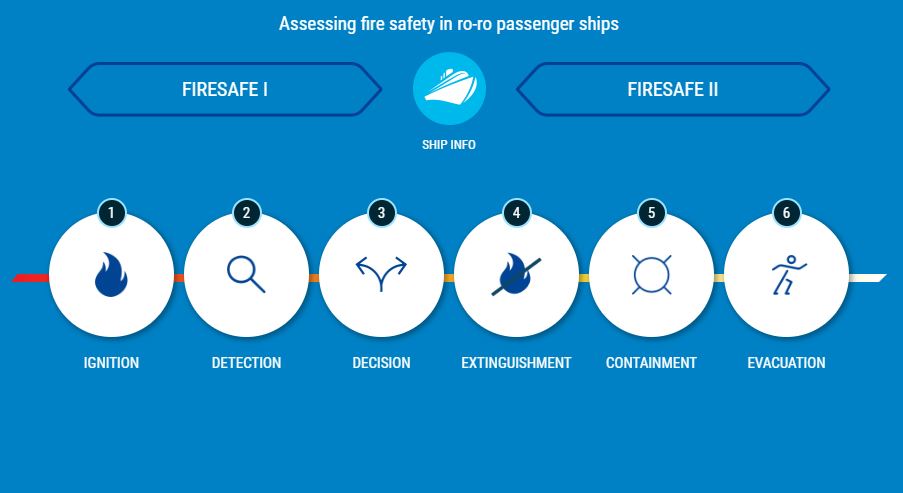 The first FIRESAFE study was initiated in 2016 with a focus on electrical fire as ignition source as well as fire extinguishing failure. In 2017, following the progress of the FIRESAFE I report, EMSA initiated the second study (FIRESAFE II) to investigate risk control options in relation to detection and decision as well as containment and evacuation, following a ro-ro space fire incident on any ro-ro passenger ship. In addition, two full scale tests were also performed, one of which focused on alternative fixed fire extinguishing systems and the other on detection systems in open ro-ro and weather decks.

The two studies were conducted according to the Formal Safety Assessment (FSA) methodology. In fact, in November 2019 the studies were reviewed by the FSA Experts Group at IMO, which agreed that in general, the FIRESAFE I and II studies were conducted in accordance with the Revised FSA Guidelines and proposed an immediate action to improve the fire safety on ro-ro passenger ships, which involved possible changes to IMO instruments.

Based on the EMSA studies and submissions drafted by EMSA, the IMO adopted Interim Guidelines on this subject and has initiated the work to amend relevant regulations of SOLAS and the FSS Code. The Guidelines which are of recommendatory nature include a number of safety proposals like for example:

- Introduction of minimum distances between openings on the ro-ro decks for existing ships and life-saving appliances (LSA) and embarkation stations;

- Introduction of all proposals related to the decision stage of a fire incident as proposed in FIRESAFE II;

- Introduction of stricter and more specific requirements for cabling and connections in ro-ro decks; and

The work at IMO has not yet been concluded with regard to the possible amendment of SOLAS regulations. All the measures mentioned above and a number of others were included in an EU submission prepared by EMSA (SSE 7/6/1) and currently are under consideration. In this context, there are discussions within the Fire Protection Correspondence Group on these proposed amendments, where EU experts have been encouraged to actively participate during the Passenger Ship Safety Experts Group meeting on 23 April 2020

Guidance on the carriage of AFVs in RO-RO spaces

Guidance on the carriage of AFVs in RO-RO spaces

STEERSAFE Study on Steering and Manoeuvrability