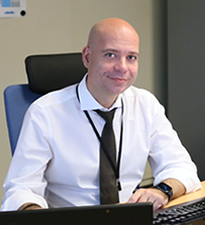 Mr Peter Kirov is Head of Department Digital Services and Simplification as of 1 October 2020. He graduated in the Faculty of Law of the Sofia University, specializing in International Law and International Relations.

Mr. Kirov held different management positions in the Bulgarian Maritime Administration (BMA) where he gradually developed his career starting as Legal Advisor and having served as Secretary General just before joining EMSA. As Secretary General of the BMA he managed the development of integrated information system for command and control of emergency response operations, the development of integrated Bulgarian maritime surveillance in the context of CISE, the introduction of the e-government concept in the work of the Bulgarian Maritime Administration and the introduction of ISO 27001 in the work of the administration.

Mr. Kirov has been an Alternate Member of the Administrative Board of EMSA since 2009. He was member of the High Level Steering Group for Digital Maritime Services and the Committee on Safety of Shipping and prevention of Pollution by Ships since 2007. During his career in the Bulgarian Maritime Administration he has also participated in the work of the Legal Committee, Maritime Safety Committee and the Assembly of the International Maritime Organisation, the work of UNCITRAL related to the development of the Rotterdam Rules and the work of ILO related to the Maritime Labour Convention.