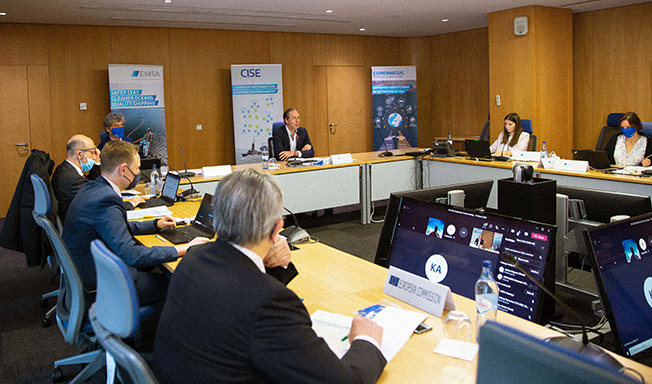 On 10 March, the CISE Stakeholder Group (CSG) gathered for the 9th time. Representatives from 28 EU/EEA Member States and various European bodies attended the meeting either in Lisbon or through videoconferencing platform. The CSG discussed the state of play of the CISE Transitional Phase activities, and the next steps towards the operational exchange of information.

In the opening remarks, Mr Leendert Bal, Head of Department Safety, Security and Surveillance at EMSA noted the increasing interest in CISE demonstrated both by the extensive participation in the CSG meeting as well as by the growing number of stakeholders who expressed their intention to join the network, such as Croatia, Cyprus, Slovenia, Malta, Frontex and MAOC(N). Mr Christos Economou, Acting Director, of “Maritime Policy and Blue Economy” Directorate and Head of Unit “Sea Basin Strategies, Maritime Regional Cooperation and Maritime Security” at DG MARE, reminded the prominent role of CISE in the EU Maritime Security Strategy and its Action Plan being updated and emphasized that 2022 is a crucial year for CISE with the key activities effectively being implemented to prepare the operational phase after 2023. Among them, Mr Economou highlighted the importance of the signature of the Cooperation Agreement, already completed by 6 stakeholders. He finally reminded the EU support to CISE through the EMFAF (support to MS via their national programmes, a dedicated call for supporting a CISE incident alerting system).

During the meeting the CSG members were updated on the status of the key activities carried out in the Transitional Phase. The roll-out of the new version of the CISE Node, the main building block enabling the operational exchange of information in the network, is well advanced and already 7 out of 11 existing nodes have been successfully upgraded. EMSA also reported on the advanced stage of development of the Responsibility to Share audit scheme.

The CSG took some important decisions. The members approved one of the first pre-operational services - the Risk Profile Service, which scope aims to help maritime authorities to share information on risks in particular geographical areas. Moreover, further enhancements in the security of the CISE network were discussed and a proposal to introduce the Public Key Infrastructure (PKI) was endorsed.

Finally, EMSA announced the upcoming events such as a training for the Node Administrators to be organised in May, a dedicated CISE workshop to be held during the European Maritime Day on 19 May and the webinar for industry planned in September 2022.

CISE hybrid workshop at the European Maritime Day on 19 May in Ravenna, Italy