EMSA participates in the relevant work of international fora, such as the Regional Agreements and the International Maritime Organisation (IMO).

'Regional Agreements' refer to the agreements signed by countries around a particular sea area to plan for pollution preparedness and coordinate responses in case of a large-scale marine pollution incident. The European Union is a contracting party to most of the Regional Agreements which have been elaborated for the sea areas along the European coastline, such as the North Sea (Bonn Agreement), the Baltic Sea (the Helsinki Convention, HELCOM), the Mediterranean (the Barcelona Convention), and the North East Atlantic (Lisbon Agreement). In advance of the accession of the European Union to the Bucharest Convention, the Agency also participates in relevant Black Sea Commission meetings. 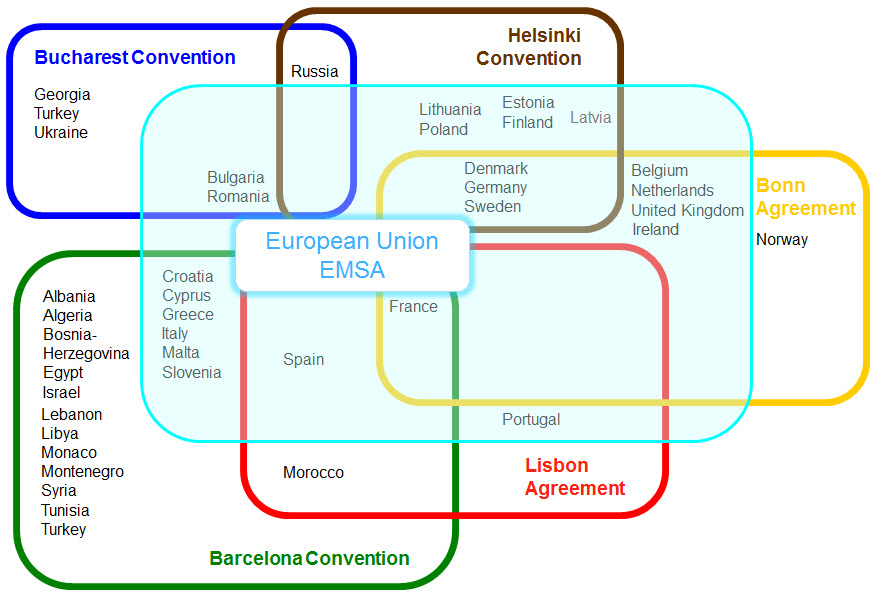 The Agency provides support to the European Commission, and participates as part of the European Union delegation in relevant Regional Agreement meetings. EMSA contributes to these meetings and is also involved in the various operational exercises organised around Europe.

Furthermore, EMSA provides the secretariat for the annually held Inter-Secretariat meetings, which bring together the Secretariats of the various Regional Agreements in Europe and the European Commission to exchange information and address issues of common interest in the field of marine pollution preparedness and response.

The Agency also works with the International Maritime Organisation (IMO) on issues of common interest and regularly participates and contributes, as part of the European Commission delegation, to the IMO's relevant technical group meetings, such as the IMO Sub-committee on Pollution Prevention and Response.

EMSA participates, when appropriate and within its mandate and competence, on behalf of DG MARE in workshops of the Emergency Prevention, Preparedness and Response (EPPR) Working Group, which was established under the Arctic Environmental Protection Strategy (AEPS) in 1991. The EPPR Working Group is one of five working groups of the Arctic Council and meets annually.