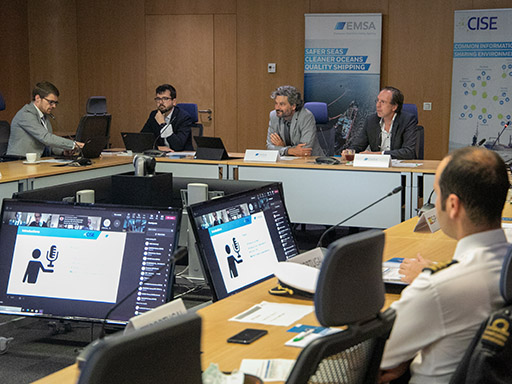 On 4 May 2022, EMSA held a workshop in Lisbon and via videoconferencing for representatives from customs and law enforcement authorities to discuss the added value of CISE to their maritime surveillance efforts.

The Common Information Sharing Environment (CISE) aims to enable information sharing among authorities from different sectors and responsibilities at sea, including customs and law enforcement. During the workshop, the European Maritime Safety Agency (EMSA) and the European Commission’s Directorate for Maritime Affairs and Fisheries (DG MARE) highlighted the importance to engage customs and law enforcement authorities in the CISE network to enhance the operational effectiveness of the wider CISE community.

The workshop also provided an opportunity to discuss and identify the type of information and CISE services that could be used by the customs and law enforcement authorities in their daily operations at sea. It was pointed out that CISE could contribute to different types of activities, including the detection and response. The latter could be supported by the use of the CISE collaborative services in the coordination of operations. It was agreed that after the workshop, each representative would share a different operational scenario that will help elaborate their CISE information sharing plan with the support of EMSA.