As a result of various onboard combustion and energy transformation processes, ships emit various air pollutants into the atmosphere. The main ones are sulphur oxides (SOx), nitrogen oxides (NOx), particulate matter (PM) and carbon monoxide (CO).

In 2018, air pollutant emissions produced by the maritime transport sector in the EU represented 24% for NOx, 24% for SOx and 9% of PM2.5 as a proportion of national EU emissions from all economic sectors. 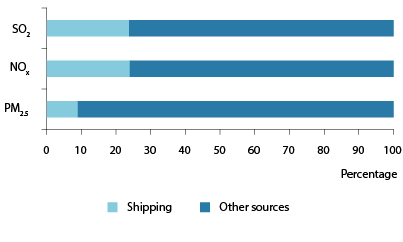 The main sulphur oxide emissions from ships are sulphur dioxides (SO2). These emissions are generated by the use of marine fuels in engines on board vessels, but also by other combustion machinery, like oil-fired boilers.

In 2019, sulphur dioxide (SO2) emissions from ships calling at EU and European Economic Area ports amounted to around 1.63 million tonnes. This represents approximately 16% of the global SO2 emissions from international shipping

To reduce SO2 emissions from ships, the sulphur content of marine fuels has been regulated in the EU since 1999 and continuously reduced since then (Directive (EU) 2016/802).

In 2015, sulphur emission control areas (SECAs) were introduced in the North and Baltic Seas, further requiring ships to use fuels with a maximum sulphur content of 0.10% m/m in these areas.

In 2020, a further requirement began to be applied globally under the International Maritime Organization (IMO) MARPOL Convention on air pollution prevention from shipse. This requires ships trading outside SECAs to use 0.50% m/m maximum sulphur content fuels.

This requirement, already established in EU legislation, is expected to reduce SO2 concentrations in ambient air in all other coastal regions in the EU (particularly in the Mediterranean Sea).

In 2019, nitrogen dioxide (NO2) emissions from ships calling at EU and European Economic Area ports amounted to around 4.46 million tonnes. This represents approximately 22% of the global NO2 emissions from international shipping.

NOx emissions from ships are regulated at international level in Annex VI of the MARPOL Convention.

At EU level, current laws in the field of marine water and air quality set out obligations to be achieved by Member States covering a whole range of pollutants, including NOx.

The existing international requirements will affect NOx shipping emissions in the EU at a slow pace. This is mainly because the more stringent MARPOL Annex VI NOx standards (tier III) will apply only to ships constructed on or after 1 January 2021 and operating in the EU nitrogen emission control areas (NECAs) in the North and Baltic Seas.

The THETIS-EU system, developed and maintained by EMSA, is a platform to record and exchange information on the results of individual compliance verifications performed by Member States under the Sulphur Directive. Since 1 January 2015, when the system became operational, the results of an average of 700-900 per month specific inspections on ships ( are recorded in THETIS-EU, confirming compliance rates of over 95% by the maritime transport sector, and allowing EMSA to establish that the sulphur in fuel standards are being effectively implemented.

In cooperation with the EU Member States, the Agency has developed and maintains the Sulphur Inspection Guidance to support a harmonized approach in the specific inspections across the EU.

EMSA also supports the reduction of air pollutants with its Remotely Piloted Aircraft Systems (RPAS) emission monitoring service, which can be used as aerial platforms with gas sensors (‘sniffers’) to make measurements of the amount of SOx versus the CO2 in a ship’s plume, ascertaining the amount of sulphur content in the fuel being used on board. Based on these measurements, the sulphur content of the ship’s fuel can be estimated and compared to the legal limits. This operational information can be complementary to the emission monitoring activities of Member State authorities to ensure that all vessels in transit in European waters comply with the legal requirements.