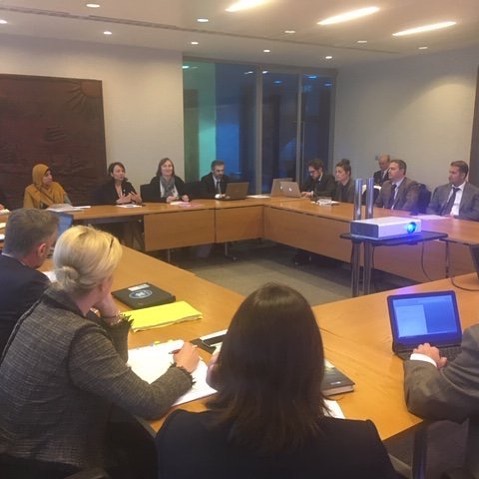 On the 14th May 2019, the European Maritime Safety Agency after a request made by the European Commission (Directorate-General for Environment) organised a meeting to discuss the possibility of designating the Mediterranean Sea as an Emissions Control Area (ECA). The meeting was a follow up of a workshop organised by EMSA on 13rth and 14th February on awareness raising for the upcoming Sulphur Regulation and its consistent implementation as from 1 January 2020 by Mediterranean countries. The meeting was held at the IMO premises in London in the margins of the 74th Session of the Marine Environment Protection Committee (MEPC). The meeting was chaired by EMSA and was attended by representatives from Cyprus, Egypt, France, Greece, Israel, Italy, Jordan, Malta, Morocco and Turkey together with representatives from the European commission, EMSA, IMO, REMPEC and the UNEP in their capacity as EU member States from the Med Region, SAFEMED IV beneficiary countries and candidate countries sharing the Mediterranean basin. The meeting started with a presentation by France on their study on the feasibility of an ECA zone in the Mediterranean Sea, recalling that air quality remains as a priority for European authorities. A presentation by REMPEC followed with a focus on the detailed process towards the designation of a Mediterranean Sea area, or parts thereof, as a SOx ECA under MARPOL Annex VI within the framework of the Barcelona Convention. The European Commission complemented the two presentations made, by informing the participants on the outcome of the third feasibility study conducted by IIASA in support of the designation of additional ECAs in EU waters with a focus on the Mediterranean Sea.

A general support towards the goal of the designation of SOx ECA in the Mediterranean Sea in its entirety was the overall outcome of the meeting. However, the need to prioritize actions to promote the ratification of MARPOL Annex VI by those countries still pending to do so, the need to ensure the possibility of bunkering low sulphur fuels as well as maintaining fair competition among all the ports in the Mediterranean Sea, the potential economic impact in some areas heavily depending on maritime traffic were also discussed and participants agreed that concrete actions shall be adhered before the finalisation of the submission.

REMPEC, in addition, presented a detailed roadmap towards the potential designation of a Med SOx ECA. All representatives from the EU Member States and SAFEMED IV Beneficiary Countries expressed support towards continuing the work on SOx MARPOL Annex VI ECA and recognized the value of the roadmaps presented.

In relation to SAFEMED IV, the European Maritime Safety Agency reiterated its support with more focused actions in this sense to the respective beneficiary countries of the SAFEMED IV project, including support for the ratification of MAPROL Annex VI. These efforts will be complemented by the continued assistance that will be offered by REMPEC to the Contracting Parties to the Barcelona Convention during the biennium 2020-2021.